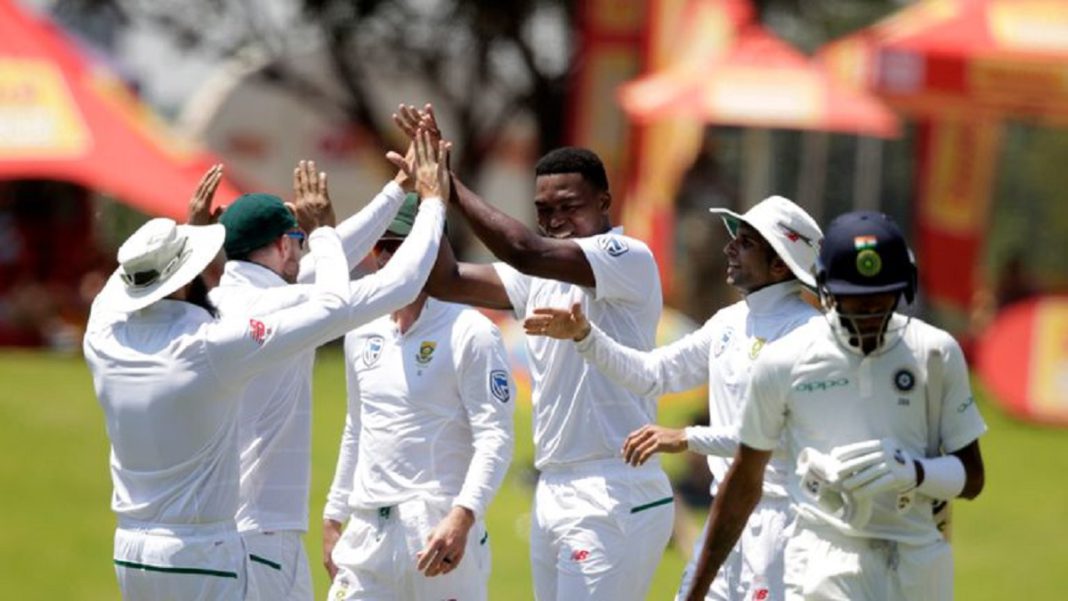 The day one of the Centurion Test match went to KL Rahul. The Karnataka opener continued his excellent form in Test matches for India. Rahul was also named the new Test vice-captain after his excellent run on the tour of England. Rahul scored 123 runs in that 1st inning of the first Test match. Now KL needs to continue his excellent work, which will help India to win their first-ever series in South Africa.

Mayank Agarwal also looked good in that first innings. He scored 60 runs, and he grinded his innings out beautifully. The South African pace bowlers tried everything to get the wicket of Agarwal. But the PBKS batsman stood rock solid for Team India and shared a century opening stand in South Africa, which was the first one for India in the Proteas Nation.

But the middle order and the lower order batsmen couldn’t continue the excellent work done by Rahul, Agarwal Rahane, and Kohli. Pujara was out on a first-ball duck. At the same time, Rahane and Skipper Kohli got decent starts to the innings. But they couldn’t convert that into a great one. Kohli’s quest for getting a century is still on even in 2022.

It has been two years since Virat Kohli scored an international hundred. India will be playing the second Test match at their most favourite venue in South Africa. India hasn’t lost any Test matches at the Wanderers Stadium in Johannesburg. VK can break his century drought at this venue and help India seal the series as the last Test match is at Cape Town, where India hasn’t won any Test matches again. So India should aim to maintain their god run at Wanders and seal the series.

Rishabh Pant had a terrific 2021 and didn’t end the year even with a half-century in the 1st Test. Pant can be the first Indian wicketkeeper-batsman to score a century in South Africa. He needs to start the new year well and repeat the heroics of the Gabba Test match. Ashwin also had a great last year, but still, he needs to do more for success in South Africa because the pitches don’t support the spinners.

India can go with all pace attack for the remaining two Test matches. Instead of Ashwin, India can include Ishant Sharma, who will be a lethal bowler on those seaming tracks. Ishant has the experience of playing three hundred Test matches for the country, and he has toured the Proteas Nation before. So he can do a handful job for the side instead of a spin bowler.

India can also include Umesh Yadav, who has blown hot and cold in overseas conditions. But his performances in England were good, and the team management can pick him because of those good bowling outings. Including Ishant or Umesh will make the Indian bowling attack look deadly. Bumrah, Shami, Siraj and Shardul looked good with the ball, and they will continue their good performance in the second Test match.

The South African had no answers to India’s bowling dominance. Their batsmen lacked the intent and technique despite playing in the home conditions. The batting around Elgar, Markram, Bavuma and De Kock. If these players fail, then their batting falters. Quinton DE Kock has retired from Test cricket, which is why the Indian pace bowlers can dent the South African batting lineup even more.

The top three batters of the Proteas Team needs to take more responsibility. Skipper Elgar and Markram need to give a decent start on the seaming track, and Temba Bavuma should hold the batting order together because the rest of the batting unit of the home team is inexperienced. Despite bowling well in the first Test match, the hosts were not competitive because of their batting failures.

Rabada, Nigidi, Jansen, Mulder and Oliver will make an impact in the second Test match. But their batting needs to come good in the two back to back matches. South Africa has already lost the Test series against England at home, and they cannot afford to lose another one. Even they can go with all pace attack for this Test match, or they can also add a batter in their playing eleven.

Venue – The Wanders Stadium in Johannesburg.

Thunderstorms have also been predicted for the second Test match, just like the first one. The play will be interrupted as it did in Centurion. The first-day play will be played despite the cloudy weather. But the rest of the four days are under rain and thunderstorms.

The Wanders stadium will be again a pacer-friendly wicket, and the fast bowlers can exploit some extra bounce from the surface. Both the teams have quality pace bowlers, and they even can drop the lone spinner to make an all-pace attack for this Test match.

Temba Bavuma – The middle-order batsman of South Africa batted well at Centurion. He did a decent job in both the innings at the Super Sports Park. But South Africa will need more from the number three batter. He needs to hold the innings even if they have a decent start from Elgar and Markram. If Bavuma holds their innings, South Africa will find it easy to make a comeback in the three-match Test series.

Virat Kohli – The Indian Skipper will aim to start 2022 with a big ton. He needs to find ways to end his century drought. It has been two years where Kohli hasn’t scored an International Hundred. The King was in superb form till 2019. But for the last two years, he has been getting starts, and he has failed to convert them. Kohli has been getting out on the fifth and sixth stump line. Sunil Gavaskar said Virat needs to talk to Sachin Tendulkar to figure out his weakness. Kohli has scored a ton in South Africa already, so he knows how to get to the three-figure mark on these pitches.

Lungi Ngidi – The Proteas pace bowler picked up a six-wicket haul in the first Test match. Ngidi’s spell was so fantastic that it triggered a collapse on the third day of the first Test, and it brought India on the backfoot after the visitors had a spectacular day one due to KL Rahul. It seemed like India would score at least 400 runs, but the magical spell from Lungi didn’t allow the Indian batters to score even 350 runs. South Africa will want Ngidi to continue his excellent bowling form in the second Test and breach India’s fortress in South Africa.

Mohammad Shami – the Indian pace bowler, was fantastic in the Test match. Bumrah had a niggle despite that, the bowling performance from the Indian team didn’t go down, mainly because of Shami. He even completed his 200 wickets in Test matches and played fewer Tests for India. Shami will want to have a good 2022, and he should start the year by bowling well at India’s favourite venue in South Africa. India should win the second Test and seal the series at the Wanders Stadium.

India has started the tour with a win, and in Wander Stadium, the visitors haven’t lost any matches. Despite South Africa playing at home conditions. India is still the favourite to win the second Test match and series.